In a mere blog post I could never attempt to delve deeply into the world of great Italian designer Piero Fornasetti, however a little insight never hurt anyone. 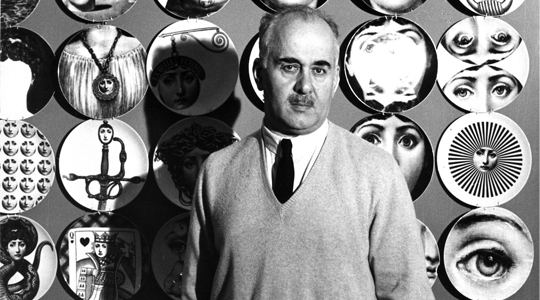 Living from 1913-1988 in Milan, Fornasetti became a man of many talents; painter, sculptor, interior designer and illustrator.  A rule breaker from the start, although he attented Brera Art Academy, he was asked to leave due to his unconventional ways.  Electing not to focus on high end Art production, which he undeniably had the skill for, Fornasetti’s career was dedicated to the Decorative Arts; creating over 13,000 objects.

After collaborations with various contemporaries including Gio Ponti and creating interiors  for the likes of Casa Lucano. Fornasetti opened his own shop in Milan in the 1960s. His son, Barnaba Fornasetti still running the operation today. It was during this early time he took inspiration from one image, torn from a magazine, depicting the 19th Century Italian Opera singer Lina Cavalieri. From there over 300 variations exist and these images have gone on to become his most famous work.

Fornasetti’s designs were mostly black and white resulting in motifs that have a great sense of modernism even today. His whimsical and playful images are unique and admired by many.

At Capocchi we are fortunate enough to have several pieces designed by Fornasetti. Firstly our Lina Cavalieri Floor Lamp, that being an exceptionally rare example, two side tables featuring the Key pattern and one chair in the Capitello Corinzio design.